Ack, well, I suppose I should say something about myself, but maybe some other time. And a picture, I need a picture too...

Here, read about the characters. They're way more interesting than me.

Arkana is a nephalim, the product of genetic experimentation.

During the early portion of the 21st century, the learned men of Arkham discovered that when all the genes responsible for psychic ability were dominant, a nephalim was the result. The nephalim were bred in captivity and kept virtually as slaves-warriors in humanity's efforts to destroy the Old Ones and their denizens on earth. Very few people considered them human and unfortunately, this eventually led to their corruption by the very ones they had been created to destroy.

In the years since the Rebellion, as most of the Nephalim elders are apt to call it, they have continued the genetic experimentation begun in Arkham. They discovered early on that their own traits breed true. All children of the nephalim manifest the nephalim appearance - wings, white hair, and pale blue eyes. Nearly all possess abilities commonly refered to as "magic" by the common man - healing, telepathy, telekinesis, pyrokinesis, and many abilities which have never been properly named.

The exception is Arkana. She looks every bit the nephalim, but she has no magical abilities, or at least none to date. To make matters worse, she's female. Not a pleasant situation in her world where anyone not able to defend herself is liable to end up as breeding stock.

At an early age, Arkana was attracted to the creative arts, especially music. Her father could not abide such a weak child and so had her hands held in a fire to teach her a lesson. When she regained consciousness from the traumatic experience, she escaped her father's castle and spent a week wandering the woods. Lost an unable to heal herself, she was eventually picked up by one of the few remaining resistance cells. She was taken in more as a lab-rat than through any compassion on the part of her rescuers.

It was here that she received a name, and here that her hands were restored... after a fashion. Nephalim children may only receive names from others. This harkens back to a time when their fathers were refered to only by number. In mockery of her lack of magic, the people of the resistance cell called her Arkana.

One of the first things the Nephalim did when they set themselves up as overseers of the human race was outlaw science and kill as many practicioners of its knowledge as possible. Still a few escaped, plotting how they might overthrow their new masters. One such was the leader of the resistance group that found Arkana. His specialty was nano-technology.

While Arkana was still feverish from the her wounds and exposure, he applied his nannites to her hands and arms. Needless to say, the pain reduced her to a near catyleptic state. Worse yet, though the nannites bonded with her, what little control she has over their formation is easily disrupted by emotion or stress. More often than not, her hands are little more than claws. And while the nannites at first only covered her wounds, they continue to move up her arms at a snail's pace.

The resistance cell was raided and destroyed soon after Arkana's arrival. She escaped in the chaos and spent many years alone, learning how to use her new hands and trying to discover any psychic talents she might possess. She found nothing.

Arkana's reasons for helping humanity remains unclear. Obviously she has no more reason to love them than she does her own kind.

Fath al Azim is a Naga.

The Nagi are cobra shapeshifters with the ability to take any form between snake and human. There are three varieties of Nagi, and of these, two prefer land and the last prefers water. The most unpleasant are the black Nagi. They are black with crimson bands of color. Living in ruins, caves, and unpleasant areas, they are not at all friendly. The green Nagi, of which Fath is one, are much more friendly. These are normally green-gold with silver triangles on their back and golden eyes. According to mythology, they acted as wise guardians of treasure and sacred places. Both varieties can spit poison, but the black Nagi will do it with far less provocation. The water Nagi are the most colorful. Described as emerald green to turquoise with deep brown and pale jade to dark gray and olive patterns, their eyes are pale green to amber in color. Their saliva is also poisonous, but they preferred the use of magic.

In addition to their coloring, the Nagi can appear in many different forms. The two most common are as serpents with one to four heads or like the Greek lamia and the Celtic banshee, human from the waist up (sometimes with an 'ox-like' horned head) and a serpent from the waist down. The nagi can also appear as humans, snakes, or winged sea dragons. It was the female, the Nagini, who would appear most often as a human.

The Nagi are very dangerous and testy beings who are quite judgemental and easily offended. Descendants of the goddess Kandru and Kasyapa, some sources said they had once lived on the surface of the earth, but Brahma sent them to live in the underworld as they became too numerous.

Their underground kingdom, possibly located under the Himilayas, is Patala-Ioka or Naga-Ioga, governed by their ruler Mucalinda. This is a kingdom filled with jewel encrusted palaces, feasts, and dancing. Scholarly discussions are common in their kingdom. Among their other treasures, they possess charms which could bestow supernatural vision or hearing upon their owners. They can also bestow invisibility on people when they enter water. All Nagi were thought to have a precious gem in their throat or forehead which imbued them with power. Female nagi were all beautiful, clever princesses, and many families in India eagerly claimed a nagi ancestor. Unless provoked, the good nagi will usually only attack humans who are evil or destined to die prematurely. Worshiped in many areas during droughts, they were often present near wells, lakes, and rivers. Their only hereditary enemy is a race known as the Garudas, a breed of shape shifting bird men.

How Fath al Azim came to be a prisoner remains a mystery. He blames all Nephalim for his inability to get home, and Arkana in particular for slaying the one responsible for his imprisonment. He is determined to accompany her until a way home is discovered.

Randolph Carter Randolph Carter has been reduced to a great blue ball of energy through his adventures (which can be read in various Lovecraft stories most notably Dream Quest of Unknown Kadath and Through the Gates of the Silver Key). 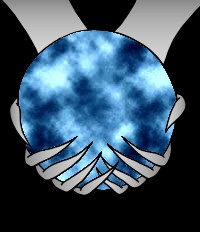 After his last adventure in which he was accidently forced to cohabitate within the body of a former alien incarnation, Randolph Carter was expelled from his host without a body of his own to return to. Fortunately, or not depending upon your perspective, he was "rescued" by the device his alien self used to return home and his mental energies were coalesced into this new form. He was then returned once more to Earth.

For many years, Randolph Carter remained lost to the world however. Those who found him saw him as nothing more than a curiousity and he languished in one private collection or museum stock room after another. Imprisoned within the blue orb of his new form and helpless to communicate with any other being, he could see through the eyes of whomever had possession of his new form, but he could only observe, never touch and never act.

That is until Arkana found him. Somehow, he is able to communicate with her telepathically and adapt her senses as his own. Once again he is able to smell a rose, taste new baked bread, and more importantly, he is able to hold a conversation. How this is possibly is a mystery to them both, especially since Arkana has been unable to utilize any of her nephalim heritage and Randolph Carter has been unable to communicate with even the most talented psychics since his transformation.